Belote is a game that has become very popular in France due to its simplicity and attractiveness. 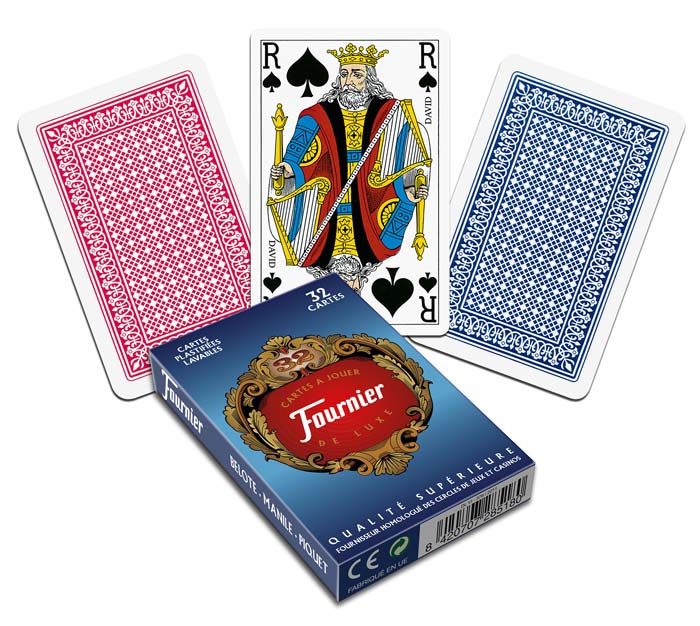 Each player declares the combinations of the cards they are holding, trying to beat their opponent with as many tricks as possible in order to revalue their cards and reach, over several hands, the score that is required to win the game.

The game is usually set at 1,000 points, although both players can agree on a different score beforehand.

A 32 card French deck is used, without deuces, threes, fours, fives and sixes.

It is a game for two, three or four players, playing individually, save in the latter case when it is normally played in pairs. Below we explain the rules for two players.

As for the value of the cards, those for the trump suit are worth:

For the rest of the suits, the value of the cards is: 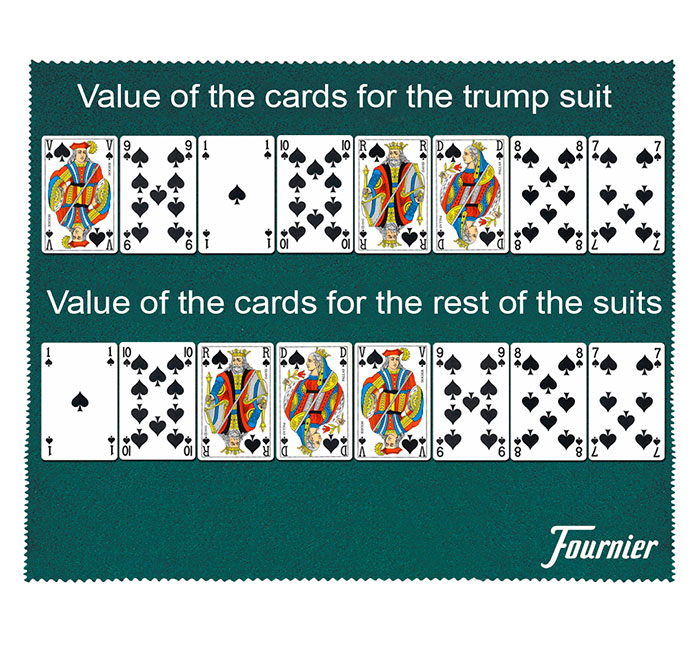 Each player takes a card and the player who draws the lowest card is the first to deal. The dealer shuffles the cards, offering the deck to their opponent, the
“hand”, to cut the deck and they then deal out six cards to each player, in
groups of three cards at a time. The top card of the undealt deck is then turned over and left next to the deck, indicating the trump suit.

The “hand” player starts by examining their hand to see if the strength of their suit, established by the jack and the nine, as well as the number of their main cards of the other suits, allows them to accept the set trump, and if not, they say “Pass”. Their opponent now looks at their own hand and starts the game, accepting the trump and offering cards to the “hand”, or passing. If, during the first turn, both players pass, the “hand” can choose any suit they find advantageous as the trump suit. But if the “hand” passes a second time, the dealer has the option to choose a new trump suit or pass. If the dealer passes, then that game is cancelled and the cards are dealt out again.

Once a suit is accepted as a trump by both players, the dealer gives each player three more cards, one at a time. After this second lot of cards are dealt, whether in the first turn with the upturned trump or, in the second, with the new trump suit chosen by one of the players, the player who deals the cards takes the bottom card from the deck and places it next to the first upturned card. This second card has no use in the game, serving merely as guidance for both players. When the game goes to the suit of the first upturned card, the player who possesses the seven of the same suit can take said card, replacing it with the seven in order to complete or improve any combination they may hold in their hand. This exchange must be made immediately after having dealt out the three additional cards, at the moment in which the opponent to who holds the seven of trumps has begun their game. 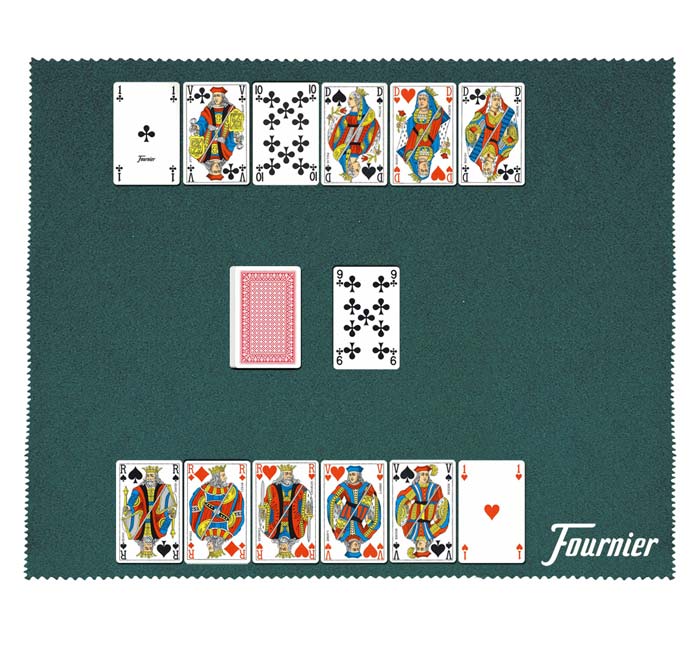 The “hand” begins the game of tricks by placing an upturned card on the table. The opposing player plays whatever card suits them best on top of that card. It is obligatory to match the suit of the card played by the opponent, however, it only is obligatory to place as well as match the trump suit.

If it is not possible to match the suit, it is not necessary to play a trump. The player who wins the trick starts the next hand. If a player has not managed to win any tricks, their opponent declares them Capot, obtaining premium points.

Each partial game ends when all the cards have been played. It can also end when either of the two players believes that they have reached the points needed to win the game, in which case they say “I have finished”. If they are wrong and lack points, then they lose the game, and their opponent wins even if they have a lower score. This interruption cannot be made without having won at least one trick in that partial game that contains one or more cards of value, because up until that moment neither the Jack nor the nine of trumps can be scored in their favour, nor any of the combinations that they might have in their hand. The game cannot be stopped when there is only one trick left to play. The game can also be finished when, without having interrupted the last partial game, one or more players, after totting up their scores, exceed the score needed, the winner being the one with the highest score.

The following tables show the value of the combinations that players can make from their hand.

Note: when a player declares Capot, they cannot add the 10 points for the last trick.

Finally, if any player commits any of these errors, the following points must be subtracted from their score. Value of Penalties:

When a partial game has ended, both players proceed to tot up the points they have won in the following way and order:

The number of tricks won has no influence on the score. Only those cards that have a real value are counted in the tricks.

If played in pairs, the score is the same for both players. The game is usually played to 1,000 points, although another number can be agreed upon before starting the game. Four sequential cards of the same suit are taken, one given to each player. The one who receives the highest card is the “hand”, with those holding the odd cards playing against those with the even cards.

The player who receives the lowest card, deals out five cards to each player, in two passes, first three cards and then two, upturning the next card on the deck top establish the trump suit.

If someone chooses trumps, the game continues, dealing out three more cards to each player, starting with the player to the right of the one who chose trumps. This player is only given two cards, because they take the card that is upturned on the table. If the set trump is accepted in the first turn of the game, the conditions for taking this card are the same as those described for the two-player game. 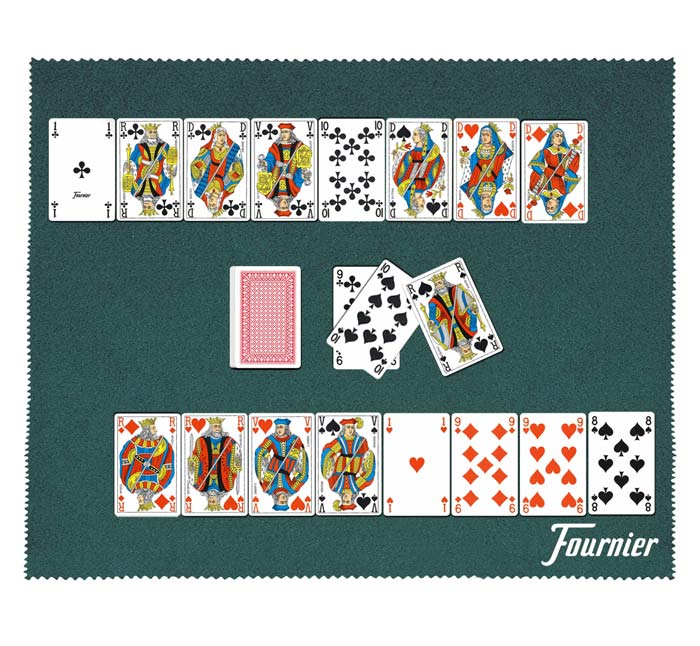