Chinchón belongs to a broad family of games based on using the cards in your hand to form combinations before your opponent can do so. Other popular games such as Rummy, Remigio or Canasta also belong to this family.

Meld an entire hand of cards before your opponents and show
them all at once, based on the rules explained below.

The order of the cards, from highest to lowest, is: king, knight, jack, nine, eight, seven, six… down to ace, which is the lowest card

Each player draws one card from the pack, the “hand” being whoever draws the highest card. The player to the left of the “hand” deals each player seven cards, one at a time, placing the next card face up on the table next to the stock deck to start the discard pile.

Each player tries to use the cards in their hand to form groups of cards of the same rank or runs of the same suit.

For both the groups of equal cards and the runs to be deemed valid, they must be formed by at least three cards. In runs, the ace can only link with two, three, etc., and king with knight, jack, etc.. When a player melds all seven cards in their hand, this is called Chinchón.

The “hand” starts the game, who can choose to take the upturned card off the table or, if they wish, the top card off the stock deck. Next, they discard one of their cards, placing it face up to their right, in case the next player is interested in taking it, and this ends the player’s turn. The next player can choose between taking the card discarded by the “hand” or the top card from the stock deck, discarding one of their own cards and so on with each subsequent player.

If, during the game, any player inadvertently draws two cards, meaning they now hold eight cards or, conversely, discards a card without having drawn, now having only six cards, in either case they will not be able to go out but should continue in the game, trying to lose the lowest possible amount of points or avoid pay anything if they are able to complete their
defective hand. If the stock deck is finished, without having ended the game, the dealer picks up all of the discarded cards and shuffles them to continue the game from where it left off.

A player can fold when they only have one or more unmatched cards in their hand worth a total value of no more than 5 points.. When folding, the player displays all the combined cards on the table, retaining the non-combined cards in their hand. The other players, in turn, may add any non-combined cards they may hold to the melds played by the one who folded, either to the trios or the runs in ascending or descending order. When playing with two decks, the runs are completed strictly from left to right and no more than one card of each correlative value can be added. Next, the following player puts down their combinations, with the others adding, in the form mentioned above, any cards that they may hold that they cannot meld.

Play ends as soon as a player manages to get rid of all but one of their cards, which is used to close the game by placing it face down on the discard pile.

The player who melds all their cards at once, Chinchón, receives a prize of 10 points and also has the advantage that no other player can place cards on their played combinations.

Chinchón is played to 70 or 100 points. Before each game, each player adds the agreed amount into the pot. After each hand, players note down both the points scored and the value of their unmatched cards, with those players who exceed the score agreed for the game being eliminated. The last player whose score has not reached the agreed total for the game wins and takes the pot.

The player who melds all of their cards, Chinchón, discounts the 10 prize points from their score.

Those players who are eliminated from the game can, if they wish, re-engage one or more times, doing so by taking the points of the player with the highest score and putting the agreed amount back into the pot. 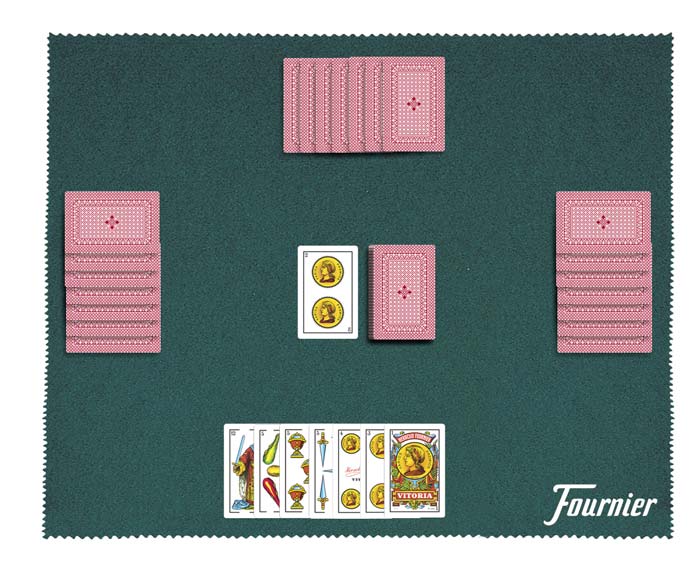