Guiñote is a version of the Tute and Brisca family of games widely played in the provinces of Aragon, Navarre and part of Castille and Leon.

To win a game by holding the four jacks (Tute of jacks) or the four kings (Tute of kings), or reach 101 points by adding the value of the cards of the tricks won and the declarations made.

Guiñote is usually played by four players in opposing pairs. It can also be played by two or three players as individuals.

For all suits the order of the cards, from highest to lowest, is: ace, three, king, jack, knight, seven, six, five, four and deuce. The value of the cards is:

Cards are drawn to determine which player should deal. The dealer shuffles the cards and the deck is cut by the player on
the left. The dealer then deals out all of the cards, one by one, from right to left, turning the last card up, called the Pinta (marking) as it marks the trump suit.

Players take it turns to deal the cards for full games, in a counter-clockwise direction.

The player on the dealer’s right, the “hand”, starts the game by playing one card.
The next players play one of their cards assisting (matching the suit of the first card), beating (playing a card of a higher value), trumping (playing a trump card) as the case may be. The trick is won by the highest trump card played or, if no trump is played, by the highest card of the suit that led.

The player of the pair that wins the trick, picks up the cards and places them face down in front of one of them, who becomes the “hand” for the next trick.

The pair that has won the trick can make declarations about the cards they are holding, a maximum of one for each member of the pair.

The game continues until each player has played their last card. Then the points scored by each pair are counted to determine who the winner is.

There are two ways to win the hand. One is to have a “Tute of jacks” or “Tute of kings”, which automatically wins. If no Tute is played then 101 or more points is needed to win. If both pairs manage to score more than 101 points in the same game, the pair with the biggest difference wins. If both pairs have the same number of points, the pair who won the last hand wins. If neither pair plays a Tute or reaches 101 points in this deal, then a second deal, called “turn around”, is played. This deal is dealt by the player who scored ten points in the last trick. It is important to remember how many points are being scored, because when a player believes that they have reached 101 points they declare this fact and the hand ends. After the check is made, the opposing player wins if the player that claims to have 101 points has made a mistake.

The game ends when one of the pairs has won the agreed number of hands.

Claiming to have the jack-king pair of the same suit is called a declaration. If a player is holding the jack and king cards of the same suit, they can declare it after either one of the pair has won a trick. If both players have one of these combinations, they can both declare after winning the trick, however, they cannot declare more than two, having to wait until they win another trick to declare again.

The cards of tricks won, declarations and the last trick of the hand are all worth points.

Last trick. Winning the last trick of the hand, also called Monte, is worth 10 points and in the event of a tie the team that won the last trick wins.

Tute This is the combination of 4 kings (Tute of kings) or 4 jacks (Tute of jacks) held by a player. Where mode of play permits it, the player who declares Tute wins the hand.

The hand is lost if 101 points are claimed but this score has not been reached. Another action that leads to losing the hand is reneging, which consists of not playing, assisting or trumping when being able to carry out any of these actions in this order. 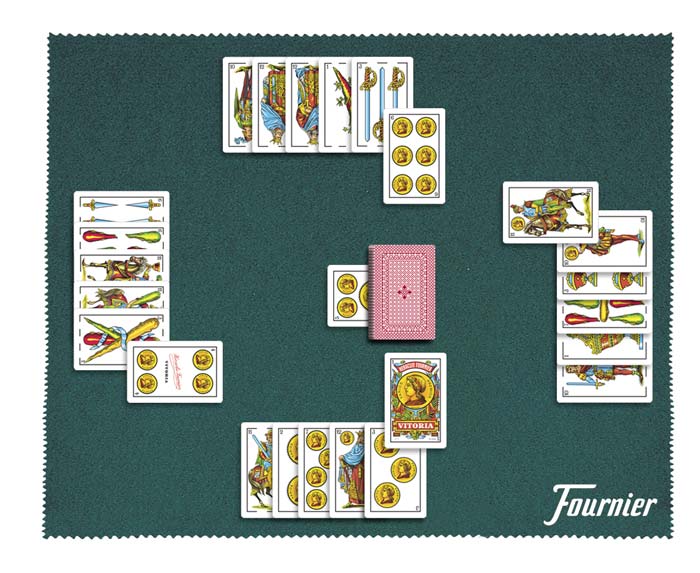