Julepe is a game of tricks in which players have to winj a certain number to recover their initial bet. The game originated in Spain, spreading rapidly throughout large areas of Latin America during the 19th Century.

To win at least two of the five possible tricks in each hand in order to win the bet and not receive “Julepe”.

Ideally the game is played by six players, because if there were more players, there would not be enough cards, and with fewer players many of the cards would not be played.

When there are seven players, the problem with the lack of cards is solved by simply agreeing that the player on the dealer’s left does no take part in that hand. When there are five, the problem of too many cards is avoided by giving each player six cards in the hand. Those who play discard by substituting the cards necessary to complete a hand of five cards.

The order, from highest to lowest, for all suits is: ace, three, king, knight, jack, seven, six, five, four and deuce.

As this is a game of tricks, the cards have no value in points.

The first to deal is chosen at random. In each turn, the dealer places the amount agreed beforehand in the centre of the table. The cards are shuffled and the deck is cut by the player on the dealer’s left, then each player receives five cards, turning the next card face up to establish the trump suit. The rest of the cards are left face down on the table. The dealer can take the card that establishes trumps, however, if they do and then go on to receive Julepe, they will have to pay double the amount that is placed on the plate.

A trump suit is established for each hand, with any trump card beating any other card that is not trumps.

After each hand, the turn to deal, discard and play passes anticlockwise.

At the start of the game all the players put the agreed amount into the pot. This amount will be the same that each player has to put in when it is their turn to deal. The “hand”, on the dealer’ right, is the first player to start the game. For subsequent tricks, the “hand” is whoever won the last trick.

Players are not obliged to take part in all of the hands. After looking at their cards, each player can say “Pass” or “Play”,

however, the dealer must always play. Those who say “Pass” do not take part in the hand. Those who say “Play”, when it is their turn, can discard from one to all five of their cards and ask for new cards from the deck. If there are not enough cards left in the deck for everyone, the discards from the players who passed are collected up, shuffled and dealt out to the players who still need cards to complete their hand. 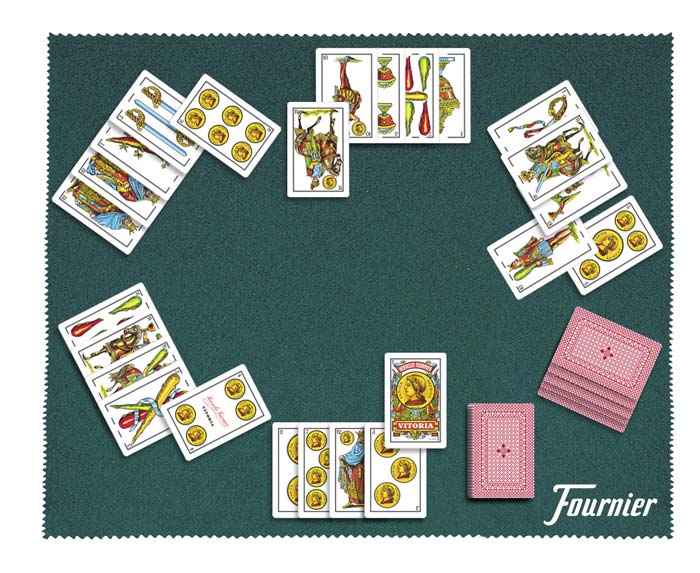 The “hand” is the first to play a card in the trick. The following players have to play card of the same suit (assist), if they have one, or higher if possible (beat). If a player does not have a card of the matching suit, they must play a trump card, ideally higher than the trump card played by another player. If they are not able to out-trump, they must still play a trump card. A card from either of the other two suits (discard) can only be played when the player has no matching suit or trump cards.

The player who played the highest card of the opening suit or the highest trump wins the trick, and becomes the “hand” of the next trick. When the hand finishes, each player who has received Julepe pays the amount that was on the plate to the player or players who have won.

If only two players are playing and neither receives Julepe, the amount on the plate is shared equally. When the pot is divided, all the players must put the agreed amount in again. In this case, the player whose turn it is to deal does not put that amount in the pot twice, only once like the other players.

If there is no winner due to the fact that all the players have received Julepe, then everyone has to pay the Julepe and these amounts are added to the pot for the next game.

When all players pass, except for the dealer, the “hand” takes the first six cards off the deck and discards one. These two players will play all five tricks. If the dealer gives Julepe, they take whatever is placed in the pot but if they receive Julepe, the one who win does not receive anything and the bet is left on the table to increase the pot for the next game. If neither gets Julepe, the pot is divided, but only the dealer takes their share, the other player has to leave their share in the pot.