Mus is most certainly the most popular Spanish card game there is, thanks to its unique appeal and special characteristics that make each match an exciting game.

To win eight Amarrakos (40 stones) in one or several partial games. It can also be played to six Amarrakos (30 stones).

It can be played individually by two or more players up to a maximum of six, or between four or six, forming two opposing teams of two and three players respectively. The most interesting and most played match is the four player version, played in pairs, the rules of which are explained here.

The order of the cards, from highest to lowest, is: king or three, knight, jack, seven, six, five, four and deuce or ace. There are no trumps or differences between the suits.

The value of the cards, in any of the four suits, is as follows: each king, three, knight or jack is worth 10 points; the other cards, their natural value represented by the pips, except the deuces, which, like the aces, are worth one point. The kings have the same value as the threes, and the deuces are equal to the aces, which is equivalent to playing with 8 kings and 8 aces. However, it can also be played using only 4 kings and 4 aces, in which case the threes and deuces retain their natural value.

The player on the hand’s left, after shuffling the deck, offers it to the player on their left to cut, who when cutting has to lift more than 3 cards and cannot leave less than 3. Next, four cards are dealt to each player, one at a time, starting with the “hand”. The direction for dealing the cards, as well as play, is from left to right.

After the four cards have been dealt, each player studies the possibilities of their hand. The “hand” starts the game by choosing whether to play with their four initial cards, in which case they say “No mus” or to improve their hand by discarding, saying “Mus”

Each player in turn states whether or not they want to continue or discard in the same way. But as soon as a player, when their turn arrives, cuts the Mus by saying: “No Mus”, no one can discard and the “hand” starts play in the way described later.

If the dealer, when initially dealing out each partial game, accidentally reveals a card, there is forced “Seen Mus”, in which case the players can keep their cards if they wish, without discarding

Each partial game ends when all of the melds have been played. At the end of this hand, all players must show their cards so that there are no doubts about the pairs and disallowed cards, in order to settle the bets. A full game when, after playing the necessary number of hands, one of the teams reaches or exceeds a total of 40 stones or 8 Amarrakos. A full game also ends, without totting up scores, when a player accepts an “Ordago” (special bet), showing all the players their cards to see who wins
.

Note: If a very strong bet is made, even when it is much higher than the game’s 40 stones or 8 Amarrakos, and a player accepts it, the game is not yet won or lost and must continue to be played until the end. A Mus match is made up of 3 full games, with the first team to win 3 full hands of 8 Amarrakos winning the match. 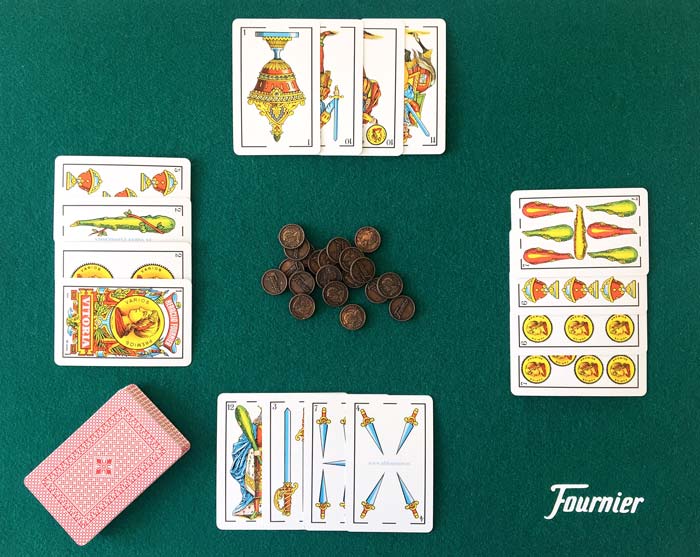 If everyone has said “Mus”, each player in turn discards the cards they do not want and the dealer gives them an equal number of new cards, which can be up to a total 4 cards. The “hand” starts, placing the cards face down on the table so they can not be seen. This discard can be repeated as many times as the four players wish.

When the deck runs out of cards without having been able to complete the deal, the discarded cards are collected up and shuffled, except when only one player needs cards, in which case their discard is left to one side and their cards are completed using the discards of the other players.

Mus is not a trick winning game, in Mus each player must make the opposing players think that they hold the best cards, using the 4 cards that they hold and which are not shown until the end of each partial game. However, there are cases where a player will do the opposite in order to surprise their opponents and outplay them.

The “hand” is the first to announce whether they wish to pass, bet (two stones) or make a bigger bet, and each of the other players in turn must state if they pass, accept the bet or increase it. 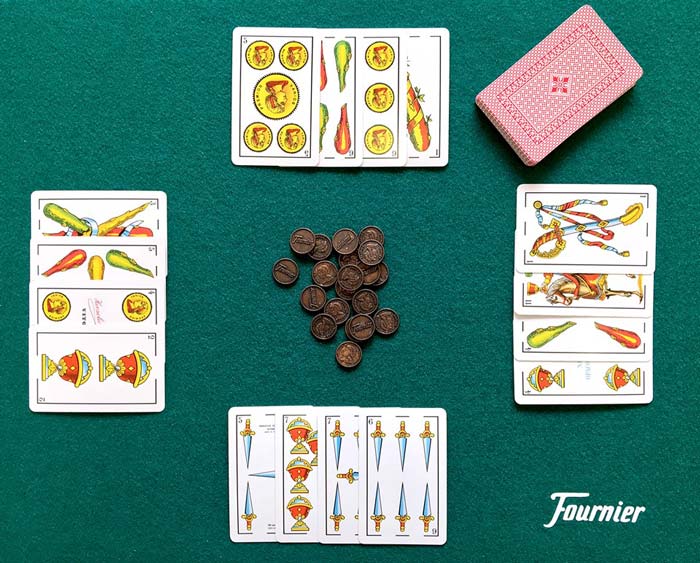 The “hand” must announce the bets in the order already established: High, Low, Pairs, Game or No Game. In the Pairs bet, when a player’s turn arrives they say whether or not they have pairs, initiating the bets that, at least, one of the players in each team has Pairs. Game (Juego) is initiated in the same way, with each player in turning saying Game “Yes” or “No”. If no one has Game, bets are made between the players that wish to bet on the best No Game (No Juego).

A player can pass, without being eliminated, as long as no player before them has bet, being able to enter the game when it is their second time to speak, accepting or increasing the previous bets; however, if a player passes after a previous player has made a bet then they are definitely eliminated from that game.

WORDS USED DURING THE GAME

Players are not allowed to tell or show their partner what cards they hold. Nevertheless, since players have to hide the cards they are holding from their opponents, partners can pass information by means of signals and help each other during the game. The most commonly permitted signals are: 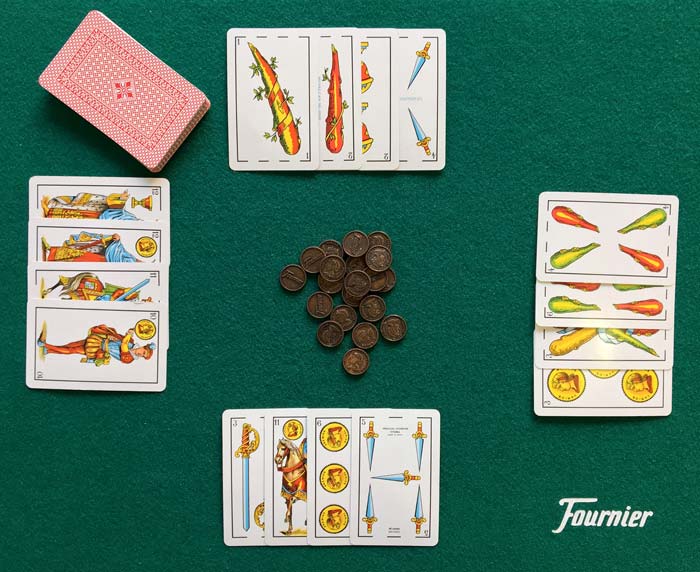 As each pair of players plays together, the score is common to both members, which is why the two of them usually both keep score, one scoring the stones and the partner the Amarrakos.

When the game begins, a saucer is placed in the centre of the table, which contains the stones necessary to play the match. The amount bet during each game is remembered and recorded at the end of each partial game. The “Dejes” are noted down as and when they occur.

At the end of each partial game, the players tot up their scores by announcing how many stones they have won and why. They then take as many stones as points that they got during that game, placing them in front of themself or their partner so it is clear to see who has what at all times.

When the player who counts the stones has five in front of them, they say: “One Amarrako” and their partner takes one stone, leaving the other four in the centre.

When, at the end of a partial game, a team has reached or surpassed 35 stones, one of them must say: “Adentro” (Inside) and then all of the Amarrakos are put back into the centre of the table. This is done to warn the opposing players that they are about to win the full game.

The value of the bets, in the order to be claimed, is as follows:

When a team needs very few stones to finish a complete game, they have to be especially careful with the bets or Órdago, and remember that the first thing claimed is the “No” or “Deje”, collecting stones from each player in the indicated order, with the first team to reach 8 Amarrakos or 40 stones winning the game. 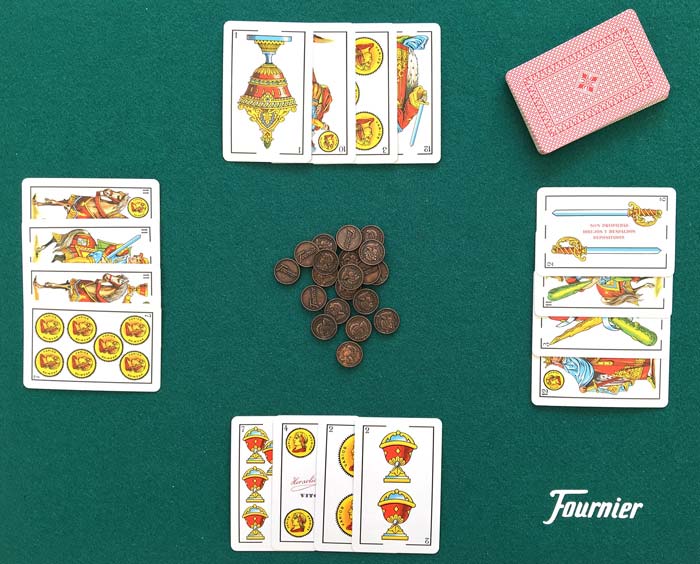 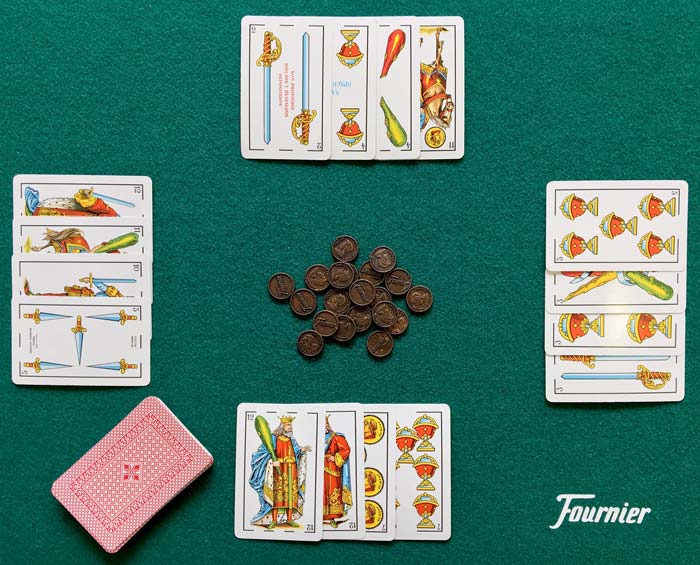 Collection of the bets is governed by the following rules: 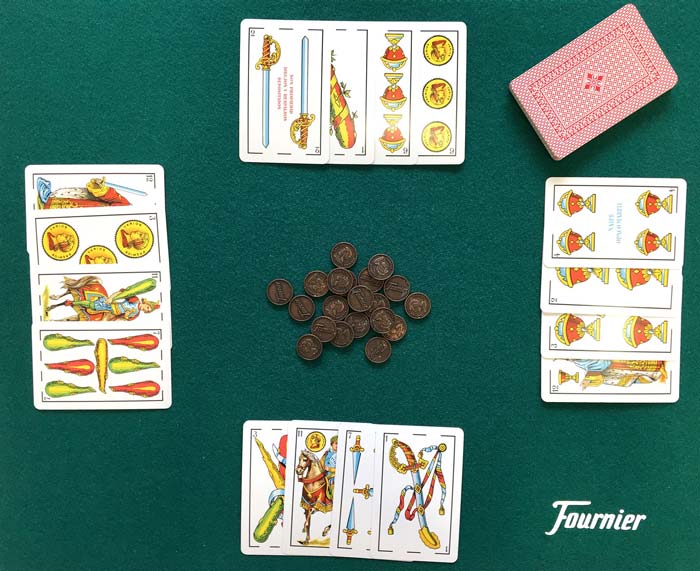