Pocha, also known as “La Podrida” or “Oh Hell”, is a popular game in various Spanish-speaking countries, so this accounts for the high number of variations that exist. It is a game of tricks in which the aim is not to get more or fewer tricks but to predict how many tricks will be won.

Make predictions at the beginning of each hand, making sure that the number of tricks won is as high as possible.

Pocha can be played by various numbers of players, but the ideal game is played by 4 or 5. When played by 3, the deuces are taken out of the deck so that everyone receives the same number of cards when the entire deck is dealt.

The order, from highest to lowest, for all suits is: ace, three, king, knight, jack, seven, six, five, four, three and deuce.

The cards themselves have no value in points, as only the number of tricks won or lost by each player is taken into account.

A draw is made to decide which player will be the first to deal, the “hand” being the player on the dealer’ right. The player on the dealer’ left cuts the deck. Then the dealer deals each player the corresponding cards for that hand, one by one, in a anti-clockwise direction, turning the next card face up which is the one that will be the trump suit, and which will remain visible next to the deck in the centre of the table. In hands where all the cards in the deck are dealt, the dealer shows their cards before keeping it themself, and that card establish the trump suit.

Pocha is played up to a certain number of hands, which has been previously agreed by the players. When this number of hands has been reached, the player who has the highest score is the one that wins the match. 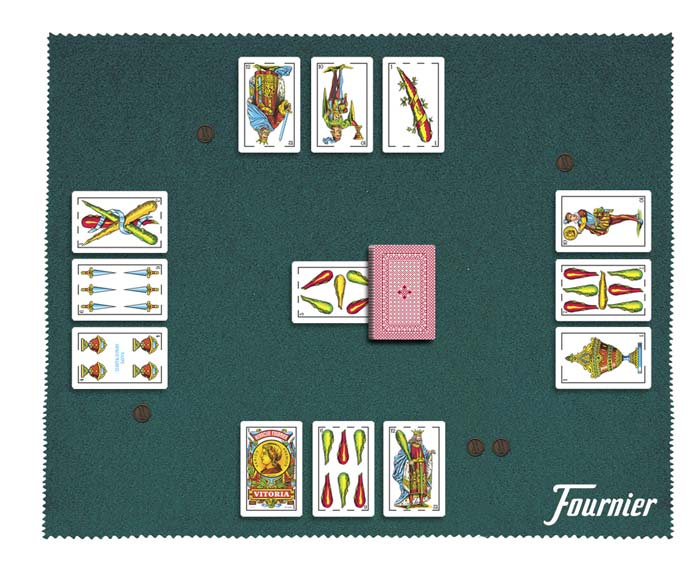 The “hand” starts by playing a card and the rest of the players must play one of their own by matching the lead suit, beating it or, if possible, trumping it to win. If a player does not have a higher trump card than the one played in a trick, they can play any card. If the “hand” leads with a trump, they are said to be trawling and all the players who have a trump card will have to play it. If a player does not have a card of the matching suit or a trump card, they may play any card from either of the other two suits.

The trick is won by the player who has played the highest trump card, but if no trump is played, then the one who played the highest card of the leading suit. The winner of the trick, places it face down in front of them, becoming the “hand” for the next trick.

The game continues like this until all the cards that the players are holding have been played. The player who has the highest score at the end of the last hand wins the match. In the event of a tie, another hand is dealt with one card per player in order to break the tie.

Each hand consists of as many tricks as cards held by each player. Before playing the cards, each player must state how many tricks they think they will win in that particular hand, starting with the “hand”.

This prediction of the tricks that each one will win is the basis of the game, as the aim of the game is not to win tricks but to predict these correctly.

After playing all the cards of the hand, the scores are updated based on the number of actually tricks won by each player with regard to the tricks predicted before playing. Each player that bid the exact number of tricks that they won gets 10 points. The players who predicted correctly also get 5 points for each trick won in that hand. Players who did not win the number of tricks that they had predicted get 5 negative points for each trick of difference, whether their prediction was too high or too low.

To keep score, a double entry table is used. The score sheet is usually divided into columns. The first column on the left is used to indicate the number of cards corresponding to each hand and in the other columns, each player’s score per hand and a cumulative total of each player’s score.