Poker is an American card game, although its origin seems to be French. This game has become one of the most played in the world, thanks to its simple mechanics. The game relies heavily on faculties intervene but without involving complicated calculations. 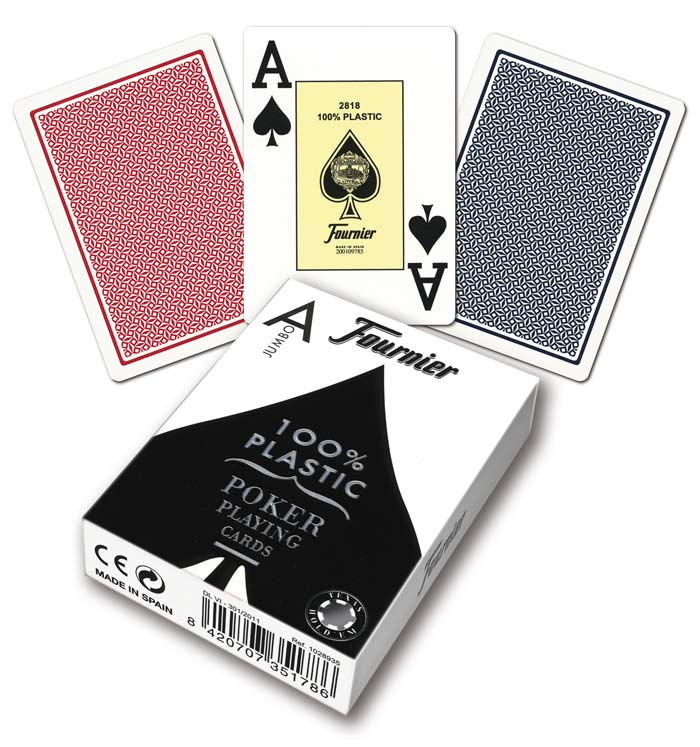 To meld a hand higher in value than that of opponents. It is not necessary for the hand to be better than the others, merely that rivals believe it is, so that they fold before seeing the cards.

It is played with a 52 card English deck. Usually two decks of different back colours are used, so that while one is in play, the other is left shuffled beside the player who deals next time. Players decide beforehand whether to use one or both jokers/wild cards, but it is best to play without using any wild cards. The wild cards are used to supplement or represent any other card.

Two to seven players can play, although the best games are ideally played by five or six. Each player plays as an individual, without a partner.

The order of the cards, from highest to lowest, is: ace, king (K), queen (Q), jack (J), ten, nine, eight, seven, six, five, four, three and deuce.
All suits have the same value in any poker hand.

The cards are shuffled and dealt out face up, one by one, to each player from left to right, and whoever gets the first jack (J), is the one who deals first. The dealer has to give the player on their left the choice to cut the deck, this is the only person that can do this, if they do cut the deck they must leave at least five cards. Next, the dealer gives each player five cards, one at a time, in the stated direction. With each new game, the turn to be dealer passes to the player on the right.

Each player uses their five cards, discarding those that do not interest them, to meld the hands that, from highest to lowest in value, are explained below:

Note: If, when playing with a wild card, two players have the same poker hand with cards of equal value but one of them has used the wild card, then the player who formed the hand without a wild card wins.

After dealing out the cards, each player studies the possibilities of their hand, and in turn, starting with the “hand”, announce if they wish to play, by betting, or pass. After each player has had this option, the dealer proceeds to deal out the cards that the players request in exchange the cards they discarded to improve their initial hand, this can be up to all five of their cards, although they can also choose not to discard any. Once again, each player studies their hand, being able to bet or pass, and once the bets are finished and balanced, the cards are shown and the player with the highest hand wins the pot.

So Poker is composed of the following phases: 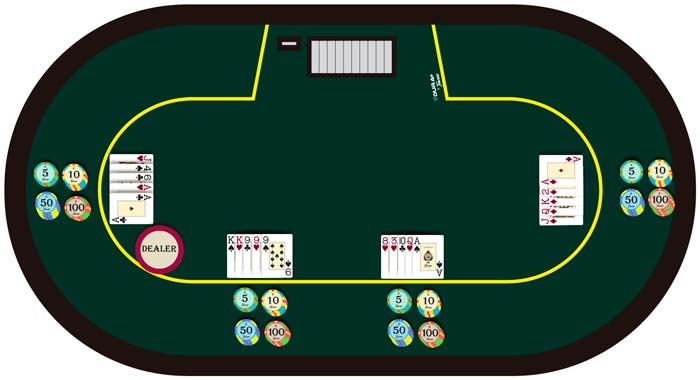 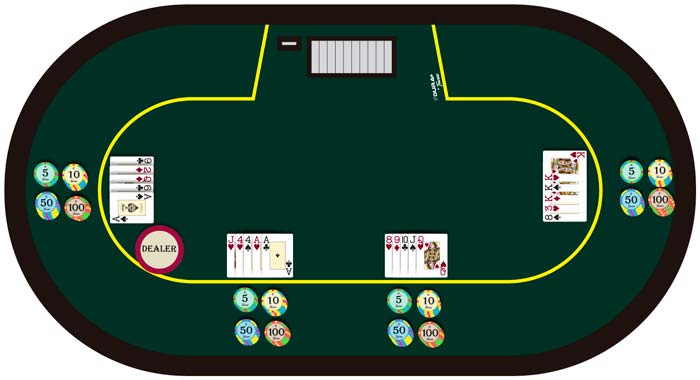 Bets made after receiving new cards follow the same order as those made before discarding. The player who opened is the one who has the right to start the bets in the final phase of the game. If this player has withdrawn from the game, this right passes to the next player in turn. Each player, in turn, has the right to call, bet, increase the previous bet, accept the previous bets or pass.

During the course of the betting, players cannot ask how many cards have gone. No player can force another player to play more than they have in their limit and no player can, after seeing their initial cards, increase their limit. Should higher amounts be bet by other players, these will be seperate from the rest, and the one that wins will only win the stakes bet by each one of those players plus whatever was in the pot at the beginning of the hand. This player takes only their winnings, with whoever has the best hand among the other players winning the remaining bets. If after revealing their cards, two players have equal hands, the winnings will be shared between the two. Nobody has the right to see the hand of a player whose bet has not been accepted.

The following rules should be taken into account to establish who wins the game:

When playing Jack pot, the player who opened the game is only obliged to show jacks-or-better, being able to conceal their remaining cards. The player that bets last is the first to show their cards.