Tomate, due to its simplicity, is an extremely popular card game throughout Spain.

The aim of this game is, firstly, to win a trick so as not to receive Tomate, and secondly, to try to give Tomate to the other players.

It can be played from two up to a maximum of thirteen players.

The order, from highest to lowest, is: ace, three, king, knight, jack, seven, six, five, four and deuce. In Tomate, the cards have no value in points.

Each player draws one card from the deck. Whoever draws the lowest card is the dealer and puts three counters in the pot, which is the Tomate amount, before dealing the cards. Next , the deck is cut by the player on the dealer’s left and the dealer deals out three cards to each player, one at a time, from left to right, placing the next card, which establishes the trump suit, face up on the table next to the stock deck. In all subsequent games, the turn to be dealer continues from left to right.

When the cards have been dealt, the dealer, before seeing their own cards, can take the card that establishes the trump suit by saying “I take”, having to discard any one of the cards in their hand. If they do decide to take the suit card, when their turn comes they cannot pass and have to play.

The “hand” starts the game, saying “Pass” if they do not wish to play or “Play” if they do. The other players, in turn, have the same choice, being able to pass or play. All the players who decide to pass leave their cards face down in the centre of the table. Next the “hand” or the next player in turn, if the “hand” has passed, starts the game by playing any card. The rest of players, in turn, must play another card that either follows or beats the suit played. If it is not possible to beat it, a lower card is played. If the player cannot follow the opening suit, then they must play a trump card and if that is not possible, any card can be played.

The player who wins the previous trick starts the next one by opening with any card and the other players play from left to right in the way already explained.

When all but one of the players pass, any player, starting with the “hand” can announce “I take the stock”, taking the top three cards off the stock deck in order to use them. This is done to prevent the only player who did not pass from winning the pot with no competition. If the player who “takes the stock” wins, the amount their opponent has to put in the pot is kept as “reserve” for the next hand, but if they lose, they do not have to put any amount into the pot. In some games it is usual that the player who “takes the stock” does so for themself, running the same risks as if playing with their own cards. This will have to be agreed on before beginning the game.

The round ends when each player has played the three cards they are holding. If there is a player who has not managed to win one trick, they receive Tomate. If the dealer took the suit card, they must win at least two tricks in order not to receive Tomate.

Before starting the game, the players have to agree on the value of each counter, this will be the same for all the hands.

When each hand finishes, any players that have received Tomate have to put the same amount into the pot as is already there.

The pot is divided among the players that have won a trick, one third of the pot for each trick won. So if a player wins all three tricks, they take whatever is in the pot.

It is customary not to put the total amount of Tomates received into the pot, because this can increase it so considerably that it makes the game too expensive. Consequently, reserves are made with a part of these Tomates, which are placed on the table next to the pot to be included when there are no more counters other than the ones from the dealer.

To sum up, the pot is fed by the three counters for dealing and the agreed amount from the reserves, if there are any, which have to be three or multiples of three. The reserves are only fed with the amount from Tomates. 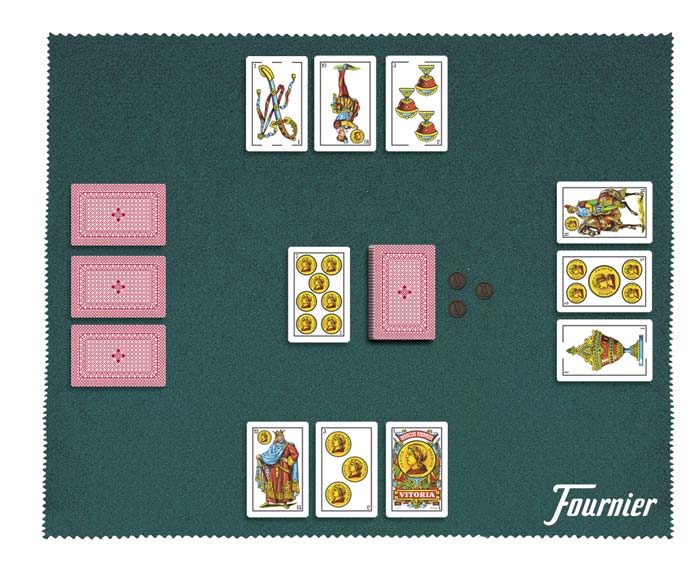