Tresillo is one of the great Spanish games, considered a development of the “El Hombre” game. The main feature of this game compared to others, lies in its individualism.

If you are the Player, to win at least five tricks over several partial games, or, if you are the Opponent (Defender), to prevent the Player from achieving this and win the points at play.

A 40 card Spanish deck is used It is customary to use two decks with different backs, starting the game off with one deck and then changing it when a player requests so before the deal.

A game of Tresillo is usually played by four players, although only three receive cards and play in each partial game. The fourth player limits themself to dealing the cards, but also wins and pays like the others. This fourth player is called the “Mayor” or “Zángano”.

The order of the cards when they are not the trump suit: 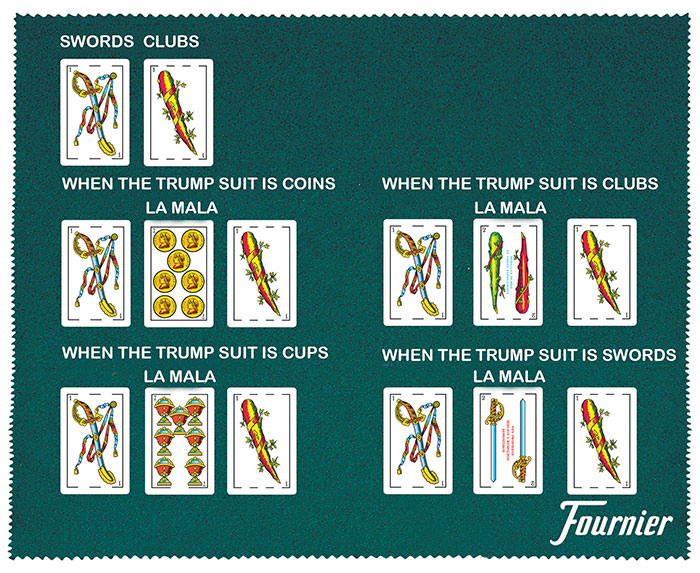 In each hand, one of the card suits is chosen as a trump suit. A custom that has become popular nowadays is to play with a favourite or preferential Suit. The most common way of playing is to choose one suit for all the hands, generally, a short suit (swords or clubs). When bidding, the preferential suit takes preference and has a higher score.

Regardless the trump suit chosen, there are two cards that are always considered trumps: the ace of spades, called the Espada, and the ace of clubs, called the Basto. The “Mala” depends on the suit chosen as trump. If it is coins or cups, the Mala is the seven of the chosen suit, and if it is swords or clubs then it is the deuce of the chosen suit. The aces of cups or coins are called “Puntos” and are the fourth highest card when either of these suits are chosen as trump.

The cards themselves have no value in points, as it is only the number of tricks won that matters.

In each hand, the turn to deal corresponds to one of the players, giving out nine cards to each player, three at a time. If there are only three players, the player that precedes the “Hand” (lead player) deals out the cards, including to themself. The rest of the game is played as if there were four players playing. A pot is placed next to the dealer, into which all of the players’ chip are put.

Bids in Tresillo, from lowest to highest are:

A player makes Bola when they win all nine tricks in the game. Bola may precede any of the bids. After a player has won the first five tricks, they must decide whether or not to try for Bola. If they do not, then the game ends at that point, however, if they do try then the sixth trick is played, and up to all nine or until one of the Defenders wins a trick. In the latter case, the player loses Bola

After receiving and looking at the cards, the players, starting with the hand, make the offers to determine who will be the Player, i.e. which of the three will attempt to win five tricks or more, and which suit will be trumps. The players can only use three expressions: 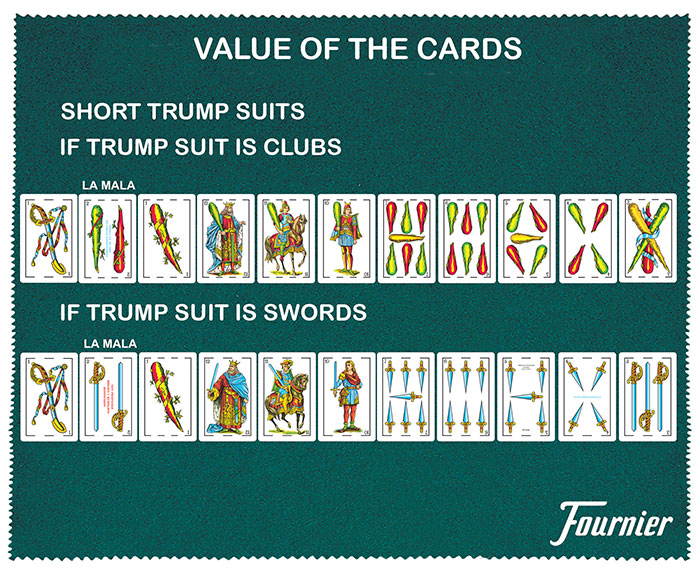 If the Player has the three Estuches among their cards, they have a high Estuche. If, in addition to the high Estuche, they have trump cards in sequence, they have as many more points as they have sequential trump cards. If the Player has the three trump cards that follow the Espada, Mala, Basto and Punto with the long trump suit (coins or cups) or Mala, Basto and king with the short trump suit (swords and clubs), they are said to have a low Estuche. But if a Player does not have the Espada or Mala or Basto, i.e., no Estuche, they are said to have a Contraestuche.

A winning card is a card from a non-trump suit that can only be beaten by a trump card. The winning cards are split into different categories:

The cards that remain in the stock deck change the category of those held in the hand. It is very important to take the category of winning cards into consideration, especially for the Player, both when choosing the bid to make and the order in which the cards should be played.

One of the players will be responsible for recording the amount in play on a piece of paper throughout the game. This player is player number 4 and, on their right, the other players are numbers 1, 2 and 3 respectively.
After studying their cards, the players start the auction as described, until one of them becomes the Player and the other two pass. After deciding on the trump suit, whether by the Player announcing it or because it is the preferential suit or by turning the top card of the stock deck face up, the players discard cards and replenish their hands with cards from the stock deck. Once the Player has discarded and replenished their hand with cards from the stock, it is the Opponents turn to discard, these can decide between themselves who has the best cards to be the Defender.

The opponent to the right of the Player, who is in the best position to be the Defender, asks the other: How are we doing? The third player responds with any of the following expressions:

After these announcements, the second player decides whether they should be the Defender or pass it to their partner. Occasionally the second player, due to having very bad cards or having very good cards and not needing to discard any, simply orders the third player to be the Defender. With Solos, Defender normally goes by hand, since the thirteen cards from the stock are usually sufficient for both opponents’ discarded cards. Only when the Defender has to discard eight or nine cards, do they offer Defender to their partner, who accepts or not based on their own cards.

The one who is Defender discards first and the other (poor hand) discards last, being able to request, at most, the same number of cards that remain in the stock deck. If any cards remain in the stock after the discard, these do not take part in the game and are said to be “Sleeping”, the dealer has to say how many cards are Sleeping. Neither of the two players is obliged to discard.

The “hand” starts the game of tricks. The other two players play their cards in turn. The player who wins the trick starts the next one. Each player places the tricks they have won in front of them, piling and crossing one over the other to see how many tricks each player has. At any time players can look at all the tricks to see which cards have already been played. Once the tricks necessary to establish the outcome of the hand have been played, this is then recorded and noted and the corresponding pay outs and charges made before moving on to the next hand.

If the Player gets one trick, the result is normally “Codillo”, however, there is a special case that occurs when each of the opponents gets four tricks, meaning that they have not lost by “Codillo” but rather by a simple “Puesta” and this receives the name of “Royal Puesta”. In the cases of Codillo with one or two tricks, the opponent with the most number of tricks wins. 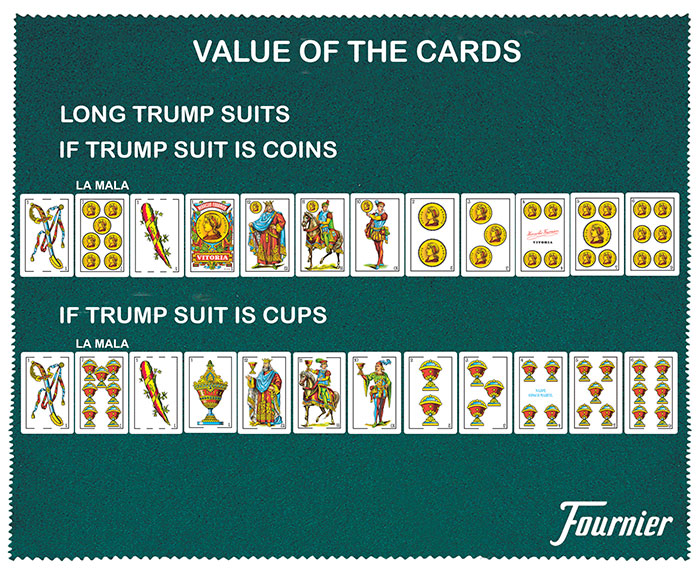 The Player can always play the nine tricks and abide by the results that are given, Taken (won), Puesta or Codillo. In the case of Solo, all nine tricks have to be played. However, in Normal Play or Vuelta, if the Player sees they have no chance of winning and will probably receive Codillo they can surrender just before playing to the fourth trick by simply saying “Pass”. If Vuelta has been played, the hand ends in this way and the Player gets Puesta. In Normal Play, the opponents can accept and say “Okay” The trick finishes and the result is Puesta. But if either of the opponents believes that by continuing to play they can win more tricks than each one of the other two, they announce it by saying “I continue” or “Defending”.

In which case that player stops being Defender and becomes Player. The game continues and, when finished, the following cases may occur:

Needed for keeping score a dish, placed to the right of the dealer, a scorecard on which player number 4 notes down the scores and tokens for the players.

The dealer puts five tokens into the pot. There are two types of bet for the purposes of paying out and collecting: 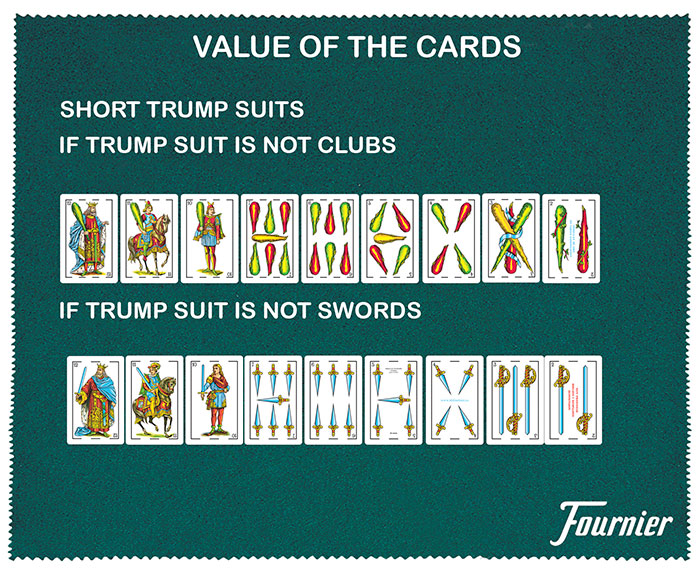 Conditions are additional payments in points for bids, Estuches and other events:

In relation to payment for Estuches, remember that in order to count the conditions of Estuche, it is necessary to have a high Estuche, considering all the sequential trump cards that follow the Basto as Estuches. When Bola is not given, the maximum number of Estuches that can be counted is 5, however, when Bola is given, all the Estuches are counted.

Collection and payment The amount in play and the conditions are paid to the Player or charged to each of the other three players, the Puestas are for the table and go into the pot, and the Codillos are collected by the player who gave it. Collections and payments are always rounded up in multiples of five.

If a preferential suit is trumps, double the points for a simple suit are charged, rounded up, and whatever is in the pot is taken.

Payment and collection for surrendered or defended hands.

In surrendered and defended play:

In none of these cases are conditions paid. 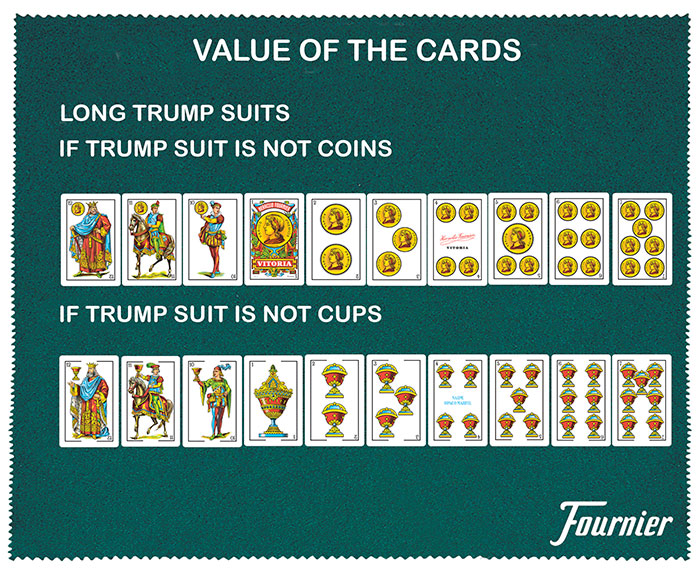