Tute is one of the most popular Spanish deck card games. The name of the game comes from the Italian word tutti, because the player who holds all the kings or all the knights wins the game. 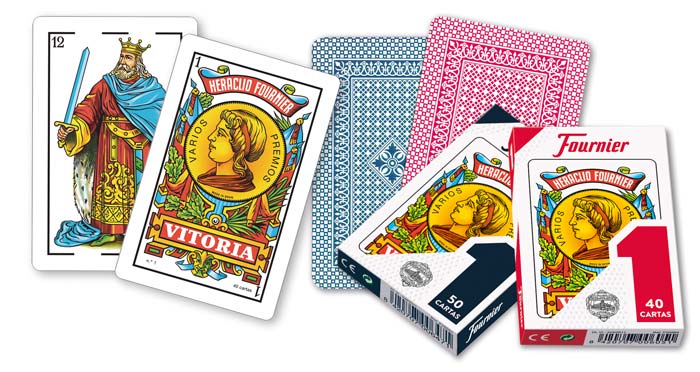 A game is played to an agreed number of hands. To win a game it is necessary to collect the four knights (Tute of knights) or the four kings (Tute of kings), or reach 101 points by adding the value of the cards of the tricks won.

Two to four players, depending on the version played.

The order, from highest to lowest, is: ace, three, king, knight, jack, seven, six, five, four and deuce. With regard to value, the ace is worth 11 points, three 10, king 4, knight 3 and jack 2. The remaining cards, called Blancas, are not worth any points.

The player who starts the trick is called the “hand” and the one who finishes it and will deal the cards next is called “postre”. With two players, in the first trick one deals the cards and the other is the “hand”. With three or more, in the first trick one deals and this player is “postre”. The player on their right is the “hand” and the others are in the middle.
Cards are drawn to decide who will be the first to deal and then again to decide on the positions. In fixed positions, the turn to deal and play cards is always in an anticlockwise direction.

The dealer gives each player eight cards and then turns the next one face up to establish trumps, leaving the remaining cards on top of this one. It is only necessary to follow the trump suit while there are cards left in the stock deck, with no need to beat them. When the stock deck has finished then it becomes necessary to follow, beat or play a trump card if it is not possible to follow.

The card that establishes the trump suit can be changed for the seven of the same suit when it is the ace, three or figure card, or by the deuce if it is a Blanca. The player who wishes to take this card places the 7 or 2 below the card but cannot take it until they have won the trick. Likewise, declarations of 40 or 20 points cannot be made until after winning a trick and can only be made once.

The “hand” starts by playing a card and the other player responds by playing one of theirs. Whoever wins the trick takes it and leaves it face down beside them. Each player takes a card from the stock deck, the first being the player who won the trick, who will be the “hand” for the next trick. Play continues like this until there are no more cards in the stock deck. The player who scores 101 points or more in one or more partial games wins.

If no one manages to get 101 points in a single partial game, the player who got the “last ten” deals out the cards again and the game is won by whoever is first to declare that they have 101 or more points by adding them to their score from the previous game. In this second partial game, it is necessary to remember how many points were won without allowing anyone to see the cards in the previous tricks won. The game finishes as soon as a player announces that they have won. If, after checking the cards, it is discovered that they have not, then the opponent wins, even if they have fewer points. The players take it in turns to deal the cards for complete games.

The basic characteristic of this Tute is that it is possible to win, whatever the total number of points, by getting Capote. This consists of winning the eight tricks that remain to be played once the stock deck has finished, but it is necessary to first announce this gameplay, and if the opposing player wins any of the 8 tricks, they are the one who wins the game.

Scoring is very simple. It is sufficient to previously agree on the amount each game is worth. It is also customary to set an amount which is won by the player who is the first to obtain a certain number of points.

Although this is a game for three players, four people usually play. Players take it in turns to be the dealer, who does not participate in the game. The dealer gives each player thirteen cards, one at a time, and the last card is turned face-up to determine the trump suit. Before beginning the game, this upturned trump card can be exchanged for the seven, if the card is ace, three or figure, and for the deuce if it is Blanche, but there is no obligation to do so.

The game is played by the following rules: It is obligatory to follow, beat, play a trump card or out-trump. When it is not possible to out-trump a card any other card can be played. It is not permitted to announce more than one declaration per trick and it is obligatory to announce “Las cuarenta” before “Las veinte”. The player who gets the most points wins the game, with a “Tute of kings” or “Tute of knights” being valid. There is no strict rule concerning collection and payments. Nonetheless, the following rules usually are applied:

Playing without a pot. During the course of the game, every player who announces “Las cuarenta” collects 40 points and 20 points for each “Las veinte”. Whoever wins the game get 100 points in a 100 point or fewer game and 200 points for a 101 or more points game.

Playing with a pot. At the start of the game each player puts 100 points into the pot. Next, the dealer puts 20 points into the pot and places this on their right. After receiving and studying their cards but before starting each partial game, players announce whether or not they will go for the pot, i.e., get 101 or more points.

If no one goes for the pot, the winner is paid as described above. Whoever wins the game without going out, collects 100 points from the opponent who got the fewest points. The opponent in the middle does not have to pay. If they win by going out, they collect 100 points from each opponent.

If a player announces that they are going for the pot, They are paid as described above.

When a player takes the pot, it is replenished with the same amount as at the beginning of the game. The monetary value of the points is established beforehand. 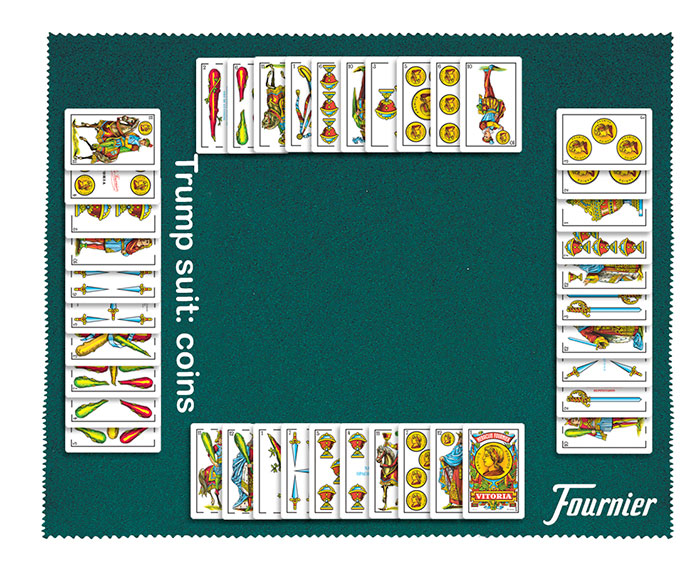 Two pairs are formed seated facing each other. Cards are drawn to decide who will be the first to deal. That dealer gives each player ten cards, one at a time, turning over their own last card to establish the trump suit. The order of play and the rules are those described for standard Tute. After winning a trick, each one of the two partners can make a declaration.

Players must follow, beat, trump and out-trump. When it is not possible to out-trump a card any other card can be played.

The cards of tricks won, declarations and the last trick of the hand are all worth points. 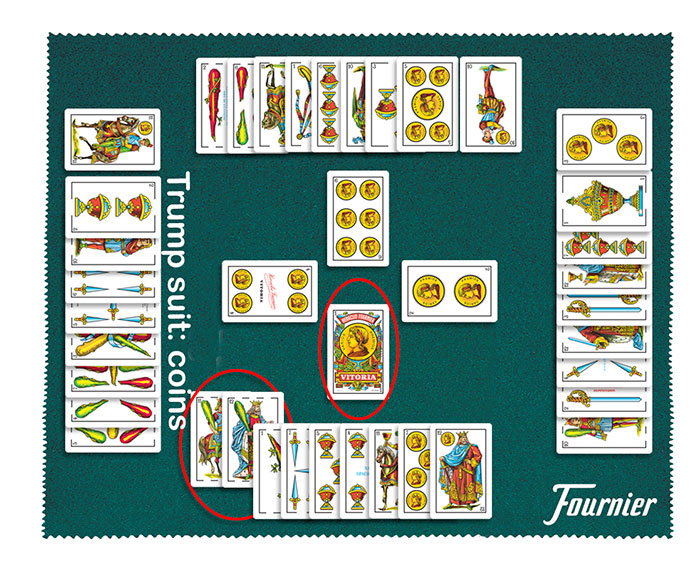