Brisca is one of the cards games that can be included within the broad range of the Tute family, that is to say a game of tricks with a trump suit where not all of the cards are dealt at the beginning of the game, but rather taken from the deck as the tricks are played.

Collect more points in the tricks won by a player or pair of players than the opponents.

It can be played by two or more players, but normally it is played between two or four. In the latter case, it is played in pairs.

The order, from highest to lowest, is: ace, three, king, knight, jack, seven, six, five, four and deuce. The value of the cards, in any of the four suits, is:

The remaining cards have no value, nevertheless, they are used to form tricks.

Each player draws one card and shows it. The two players with the highest cards play against those with the lower cards.

The player who gives out the cards shuffles them, the deck is then cut by the player to the dealer’s left, who in doing so, cannot take or leave fewer than four cards. Then the dealer gives each player three cards, one by one, in a anti-clockwise direction, turning the next card face up which is the one that will be the trump suit, and which will remain visible next to the deck in the centre of the table. After each hand, the turn to deal passes from left to the right.

The player to the right of the dealer starts the game, the “hand”, playing a card that is placed face up on the table. The other players, when it is their turn, can play any card, with no need to match the suit or play a trump card. The trick is won by the highest trump card played or, if no trump is played, by the highest card of the suit that led.

Each player draws a card from the deck, starting with the winner of the trick.

The next trick starts with the player who won the previous one, who plays any card, with the others continuing in a strict order from left to right as previously explained. The game ends when there are no more cards left to draw from the deck and all the cards have been played.

Any player, after having won a trick and before taking a card from the deck, can pick up the card that sets trumps and replace it with the seven of the same suit; the seven of trumps and any card smaller than this can be replaced by the two of trumps. This change cannot be made after playing the penultimate trick. 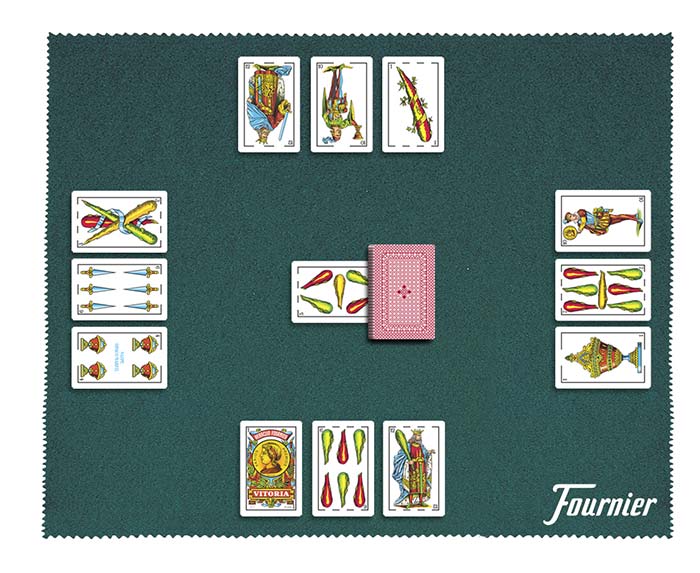 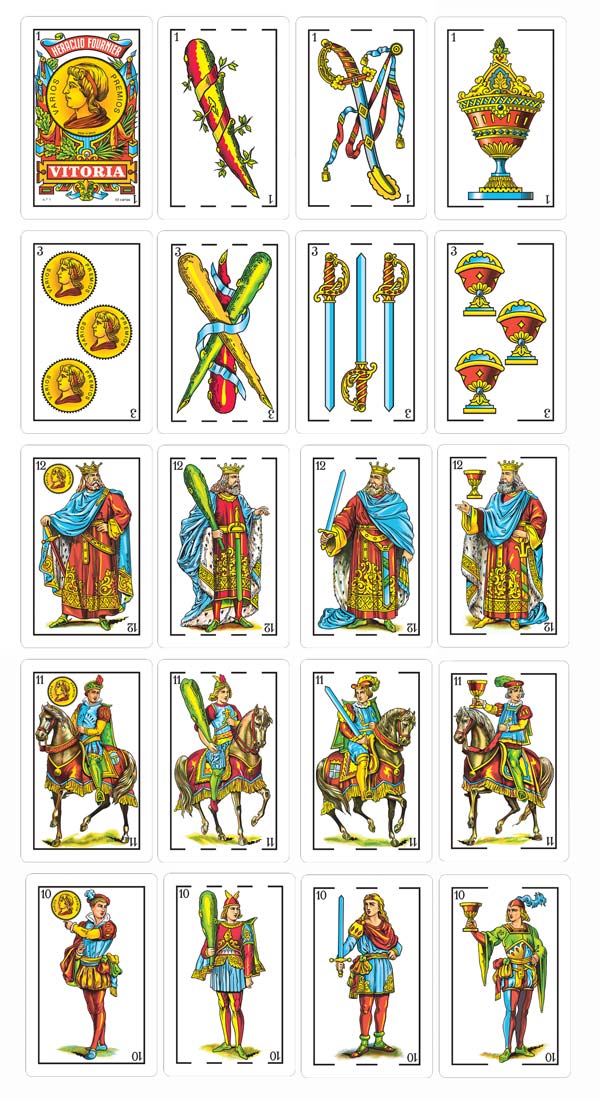 Before starting the game, all players will agree on the number of hands necessary to win the game, adding the amount agreed at the beginning to a pot which the winner or winning pair will take.

Once a game has finished, each player or pair will add the value of the cards that form their tricks, with whoever getting the most points winning. If played in pairs, the score is common to both players. There may be a tie in the score, when each player or pair scores 60 points, in which case that game is cancelled. The player or pair that manages to win the number of games previously stipulated wins the game.

Players are not allowed to tell or show their partner what cards they hold. Nevertheless, since players have to hide the cards they are holding from their opponents, partners can pass information by means of signals and help each other during the game.

The most commonly permitted signals are: